(F) – Collect
Flip a coin. If heads, draw a card. If tails, discard a card from your opponent’s hand.

Pokémon Power – Prescribe
Once during your turn, all cards from discard piles with “Rocket” or “Fossil” in their names may be shuffled into their respective decks.

(P) – Revive
Does 40 damage for every card in play with “Fossil” in its name.

(P)(C) – Origin
Reveal your hand. For every card in your hand and every card you have in play with “Mew” in its name, you may remove 2 damage coutners from any Pokémon.

Fossil Back Street
Stadium
Once during your turn, you may reveal your hand. If you have any cards in your hand with “Fossil” in their name, you may do one of the following:
1. Search your deck for a Pokémon with 90 HP or more.
2. Remove a damage counter from one of your Pokémon.
3. Put one damage counter on all Pokémon.

I am participating in a competition called Bitcoin Weight Loss Challenge 2014. 11 Bitcoin enthusiasts have signed up to see who can lose the most weight, by percent, over the course of 12 weeks.
The prize pool is distributed to 1st, 2nd, and 3rd place, with a sizable portion of the pool also going to charities that accept Bitcoin.

The contest started on Jan 20th, and, as of the first week 61, pounds total were lost. With 11 participants, that’s an average of 5.55 pounds per person.

Good things about this contest, from my perspective:

I am enjoying myself. My opponents are quite enthusiastic, and it’s a nice thing to have.

(M) – Transitional Phase – 20
Flip a coin. If heads, prevent all damage done to this Pokémon next turn. This Pokémon is now confused.

(M)(C) – Flowing – 20
If there are no benched Pokémon in play with 50 HP or more, this attack does nothing. Put 4 damage counters on any benched Pokémon. You can’t knock out a Pokémon with this effect.

Ability – Trail of Color
Flip a coin. If heads, discard an energy card attached to one of your Pokémon. Put 2 damage counters on all Pokémon in play that are the same type as that energy.

Pokémon Power – Bottom Dollar
At the beginning of your turn, flip 4 coins. If all are tails, this Pokémon is knocked out.
No player may play a Pokémon from their hand to the bench. Any time a Pokémon is put in the discard pile, immediately put it on the bench (prizes are still drawn for Knocked Out Pokémon).

0 – Actionable – 40
Flip a coin. If heads, your opponent puts an Item card from his/her discard pile into his/her hand.

(W)(W) – Flit
Reveal the top card of your opponent’s deck. If it is a Pokémon, this attack does damage equal to that Pokémon’s HP.

Ability – Brandish
After this Pokémon attacks, reveal to the top 3 cards of your deck. Your opponent chooses one of them and puts it into your hand. You return the other 2 in any order.

(W) – Oscillate
If you have more prizes than your opponent, do 10 damage to any Pokémon. If do not, discard a card from the top of your opponent’s deck.

When Baidu accepted Bitcoin, the exchange rate went up. Will Google be the one that brings Bitcoin to the moon?

Who knows, the exchange rate of Bitcoin doesn’t matter. The important thing to focus on is the prevalence of decentralized/stateless currencies. Just the existence of this news story might further that goal.

Pokémon Power – Like Mind
Reduce the damage done by all (R) Pokémon by 20. If there are no (R) energy attached to this Pokémon, this Power does nothing.

(R)(R) – Momentum – 40
Does 10 less damage for each energy attached to the defending Pokémon.

(G)(C) – Run Away – 60
Flip a coin. If heads, your opponent chooses one of your benched Pokémon and switches it with this Pokémon. Remove all damage counters from this Pokémon.

(G)(G) – Set Vegetation
The defending Pokémon is now Poisoned. Your Pokémon have no weakness during your opponent’s next turn. You can’t use this attack during your next turn.

A graph I created to show people what the size of the Bitcoin economy looks like relative to the size of a few other economies. Click on it to see larger version. 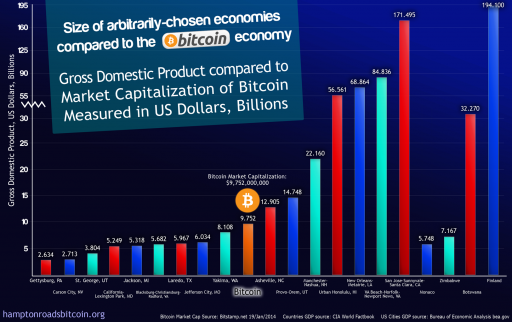 (C) – Show
Flip a coin. If heads, all of your opponent’s Pokémon have weakness to (G) Pokémon during your next turn. This effect does not go away by sending Pokémon to the bench.

(G)(G) – Vertical Endeavor
Flip 4 coins. This attack does 10 damage plus 10 more damage for each heads.
After doing damage, if the defending Pokémon has more than 40 HP remaining, move all energy cards attached to this Pokémon and attach it to any of your Pokémon in play. Discard this Pokémon.