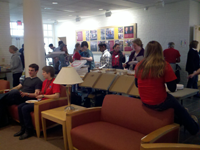 Turns out I didn’t have anything too interesting to say right on the spot while I was recording, so I nixed the audio report.

I spent day two mostly figuring out how dotnetnuke’s skin system works. A “skin” is a series of files that are installed into an existing dotnetnuke website that control the arrangement of the elements on the page and all of the design. I was deciding whether I wanted to make my own or modify an already-existing one. I decided to make one from scratch.

I felt a little jealous. The technical team working in the room next to mine built a site in WordPress and was done with building their site already, about 20 hours before the deadline.
Wordpress > dotnetnuke!