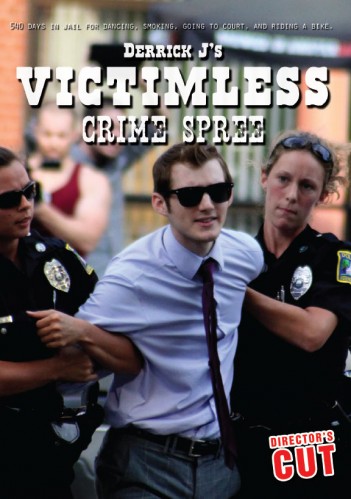 Let me tell you about person named Derrick J. He picked up his life and moved to a different area. Not for retirement, not for a job, not due to family, but to become an activist.

He had a message about human interaction and right and wrong and he brought it. He showed his principles and he showed the violence inherent to the system. He carried out acts of civil disobedience, and the great part about being alive today is that there are cameras everywhere- and this stuff gets recorded and published and that civil dis activists get larger numbers of people to sympathize with what they are doing.

His movie of his acts of non-violent law-breaking are on sale in the Director’s Cut version. You can pre-order at order.victimlesscrimespree.com
I respect people with the courage to not comply, and now we can all see it through the activist’s eyes.

The pacing, the music, the narration- this movie is the culmination of so many good elements, well-put-together. There long has existed the need for a thorough and coherent explanation of civil dis and it’s finally here.